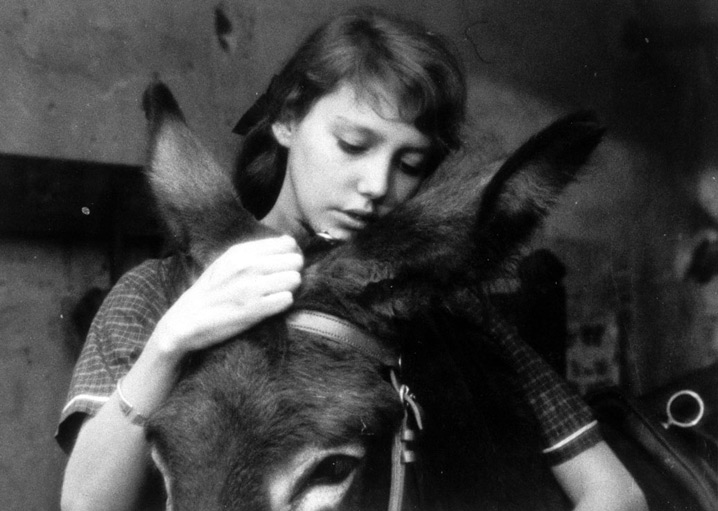 As previously mentioned in these dispatches (see #1 and #2), my chief sources of delight among the feature-length films shown at the 2009 Viennale were a pair of minor masterpieces from Filipino legend Lino Brocka—Jaguar (1979) and Weighed But Found Wanting (1974)—and the comparatively box-fresh Totó by Peter Schreiner. Having now seen two pictures by Schreiner and five by Brocka, I am very keen to catch further examples of their work and also to recommend them to others who aren't aware of their mastery. The low profile of Schreiner, even among committed cinephiles, is particularly perplexing and undeserved.

This year's Viennale also allowed me to extend my shamefully limited knowledge of the films of Robert Bresson, who has long been one of the most revered, respected, venerated figures in international cinema. Before this week I'd only ever seen two Bressons: The Devil, Probably (Le diable, probablement, 1977), which I saw at the Edinburgh Film Festival of 1999, and Pickpocket (1959), which I saw at Newcastle's Side Cinema in 2005.

I wasn't yet writing film-reviews on any kind of methodical basis in the summer of 1999, so my only written record of my initial reaction to The Devil, Probably is a grade of "C+" noted in my screening-log (later the same day I saw Werner Herzog's My Best Fiend, which got a "B+"; the day before I'd watched Søren Kragh-Jacobsen's Mifune, whose "B+" has been scribbled out and replaced with an "A-".)

I did mention The Devil, Probably in my review of Pickpocket, written for the website Jigsaw Lounge, where I described it as "drab, static." I wasn't much more taken with Pickpocket, rating it 6/10: "[Martin] La Salle, who has to carry the main burden of nearly every scene, is frequently little more than a gloomy, staring blank. And [his] Michel is less a character, more a mouthpiece for Bresson's ideas—to the extent that you wonder why the writer-director didn't just cut out the middle-man and play the role himself...[A] little of Michel's sophomoric self-analysis goes a long way. A charitable view would be that Bresson fully intended Michel to be abrasively unsympathetic, emotionally inconsistent and gratingly pretentious—if so, he succeeded all too well."

My less than enthusiastic responses to these two films probably explains why I hadn't sought out other Bressons with much energy—I found it frustrating that I couldn't see what others found so self-evidently superb in Bresson's work, and while I purchased his valedictory Money (L'argent, 1983) on DVD a couple of years back, I still haven't gotten around to watching it.

I was, however, delighted when I noticed that Bresson's Au hasard Balthazar (1966, released in some English-speaking territories simply as Balthazar) was in the Viennale 2009 lineup as part of a tribute to star guest Tilda Swinton. Indeed, I selected it as #2 in my personal "must-see" top ten in my preview for this website back in August. Ms. Swinton, who would have been five or six at the time of filming, doesn't actually appear in the movie herself, but it's one of her favourite pictures and was therefore presumably included in the programme as a kind of 'carte blanche' selection.

The story of a donkey (named after one of the biblical magi, whose moniker is Phoenician for "God protects the king") and the humans who look after and/or mistreat him in an and around a village in rural France, Au hasard Balthazar is beloved even of those who don't embrace Bresson's other work, and is generally regarded as one of cinema's great masterpieces.

I approached it with a degree of trepidation, knowing that if I wasn't blown away by this Bresson, I was probably doomed to (a) never "get" any of his work, and (b) languish in a bleak, out-on-a-limb form of heretical isolation, mocked by my peers for my cloddish cine-philistinism.

Well, I'm afraid that does seem to be my destiny after all. Yes, it has its transcendent moments (especially near the beginning when Balthazar is barely more than a foal), and Bresson's elliptical, withholding narrative technique is intriguing—up to a certain point. But after a while I started to wonder whether there's really any there there, to paraphrase Gertrude Stein on Oakland. Yes, the film deals with spiritual and religious issues—but I'm damned if I can understand those who regard the eponymous donkey as some kind of Christ figure. And when a character remarks "besides, he's a saint," I had absolutely no idea what she was talking about —rather than casting new light on Balthazar and his journey through life, it struck me as a deliberately nonsensical non sequitur, as much as Nina's famously impossible-to-deliver line "I'm a seagull" from the Chekhov play.

As many have noted, Balthazar himself (and while the beast has a certain presence, I part company with Tilda if she really does think that this is one of the great screen performances) is essentially an amiable blank upon which others can project their ideas of goodness, saintliness and so on. But by the end of the film I'd grown to regard it as essentially autobiographical: by filling his picture with so much ambiguity, so much silence, so many caesuras and absences, Bresson allows the viewer to invest it with as much meaning and magic as they themselves desire.

And besides, as we've been told for so long, Bresson's a saint. But what kind of saint would tie a burning newspaper to a donkey's tail and watch it buck and kick along a road in evident distress? That's precisely what Bresson does during one particularly harrowing scene, and I simply won't have it that cultural norms were somehow so different in mid-sixties France that cruelty to animals, even at the service of "great art", can be justified. There are a thousand ways of illustrating the maltreatment of an animal, and the majority of them do not involve the actual maltreatment of the animal concerned. And this in a film about how terrible it is that we make dumb animals suffer for our sins and stupidities! Ummm...isn't this what we call "hypocrisy"? Or am I missing some kind of exquisite hermeneutic point here—does Bresson's genius provide him with some kind of moral "get-out-of-jail-free" card?

I have other objections to Au hasard Balthazar—relating to the plotting (unnecessarily nebulous), the characterisation (haphazard), the arch "acting" (I care not a whit if the individuals involved are "professional" performers or otherwise), the humourlessness, and even, at one or two points, the editing (watch the fade that follows the breaking of a window just before the finale). Overall, I find it, like Pickpocket, ambitious and, up to a point, quite fascinating. I just can't honestly say that I regard it overall as anything other than slightly above-average—especially when considered alongside likes of Jaguar and Totó—and I'd be as hypocritical as Bresson if I pretended otherwise for the sake of maintaining some kind of cinephiliac bella figura.

A couple of mornings during the Viennale the Filmmuseum staged press screenings of some 1960s films by Oshima Nagisa, and I asked a colleague if he was planning to go along. The answer was no, as my friend explained that regarding Oshima he wasn't "a believer." Maybe this is a fair description of my relationship with Bresson—I wouldn't say that I'm exactly an atheist regarding the man many (audiences, critics, filmmakers) worship as a kind of cine-divinity, more of a cautiously skeptical agnostic. I'll watch L'argent sooner rather than later, and will definitely look out for the likes of Mouchette (1967), try to catch 1956's A Man Escaped (Un condamné à mort s'est échappé)—the Bresson which, reliable pals inform me is the one that may provide my frustratingly belated Damascene conversion.