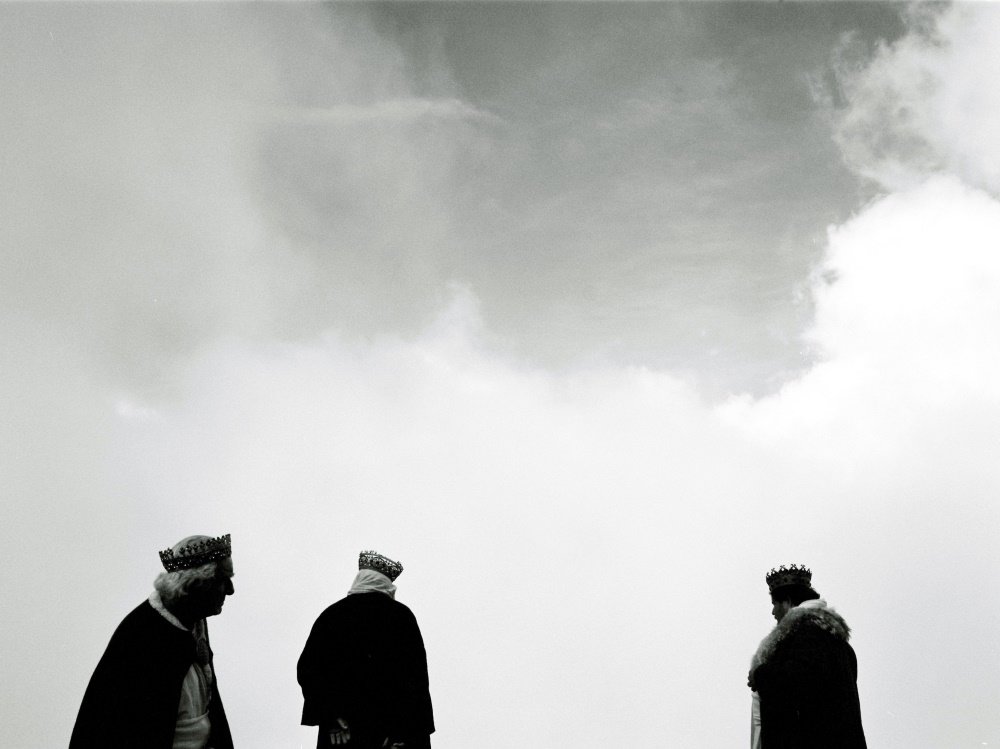 At the outset of Albert Serra's Birdsong (2008), the Three Wise Men, caught in a sudden rainstorm and retreating into a cave to wait it out peruse the boulders around them. One of the Magi declares, “If you look close enough, you can see a lot of things. Sometimes what we see is so beautiful it petrifies us,” perfectly, if unwittingly, encapsulating the director’s method of operation. As the trio literally dissolves into a backdrop of majestic landscapes, the Biblical plot also withdraws from the foreground: a maneuver not unfamiliar to those who have seen Serra’s previous feature, Quixotic/Honor de Cavelleria (2006), a less than faithful adaptation of de Cervantes's Don Quixote. Calling it an adaptation, however, should be taken with a grain of salt insofar as Serra deliberately emptied the canonical chivalric novel of all its contents save the two lonely souls at its core, Don Quixote himself and his rotund servant, Sancho Panza. Sluggishly they trudge forward, their destination unclear; they talk at times, their conversation ridiculously mundane; at times they rest. Their gradual progression is set against Catalonian vistas so glorious that no digital photography can diminish their glory.

Almost homemade in style, drawing from a scarce, borderline primitive cinematic vocabulary, one would be hard-pressed to file Serra’s films under “sophisticated.” No plot to speak of; no formal gimmicks; no psychological depth whatsoever. His cinema might be best described as primordial: Quixotic’s setting is the dead of night; its soundtrack is the humming choir of insects; its most intense action is the moon rising over the horizon at a stultifying pace, in prolonged wide shots. The physical presence is so deeply felt that audiences are forced out of the scene rather than drawn in; the beauty of Serra’s vision proves to be unbearable in every sense–to the point where sitting through his movies becomes a veritable chore. It was, I must confess, quite an undertaking to watch either Quixotic or Birdsong.

So a question naturally arises: why should we even give this guy a chance? I contend Albert Serra is the first truly religious filmmaker since Dreyer and Bresson. He not only embraced their transcendental style but also developed it further showing the new ways in how cinema can deal with the notorious “death of God”.

It should be noted right from the start that Serra is not the only film director to have emerged in the 2000s with theological motives permeating his oeuvre: Carlos Reygadas's Silent Light and Bruno Dumont's Hadewijch or Hors Satan pop into one's mind immediately. That being said, Reygadas merely retraced Dreyer's footsteps as he fashioned a sort of remake of Ordet to reiterate—re-frame at best—its central question of a miracle. In their painful attempts to weld together the earthly and divine kinds of love, Dumont's characters, in essence, grapple with the forced cohabitation of body and soul, i.e., arguably the key theme to have disturbed the Western civilization. Notwithstanding a string of other major cinematic works invoking God's presence, from Lars von Trier's Breaking the Waves to Terrence Malick's The Tree of Life, all of the above seem to be, first and foremost, preoccupied with the crisis of faith, the notorious “death of God”; all of them fall short by dealing with humans and human concerns. 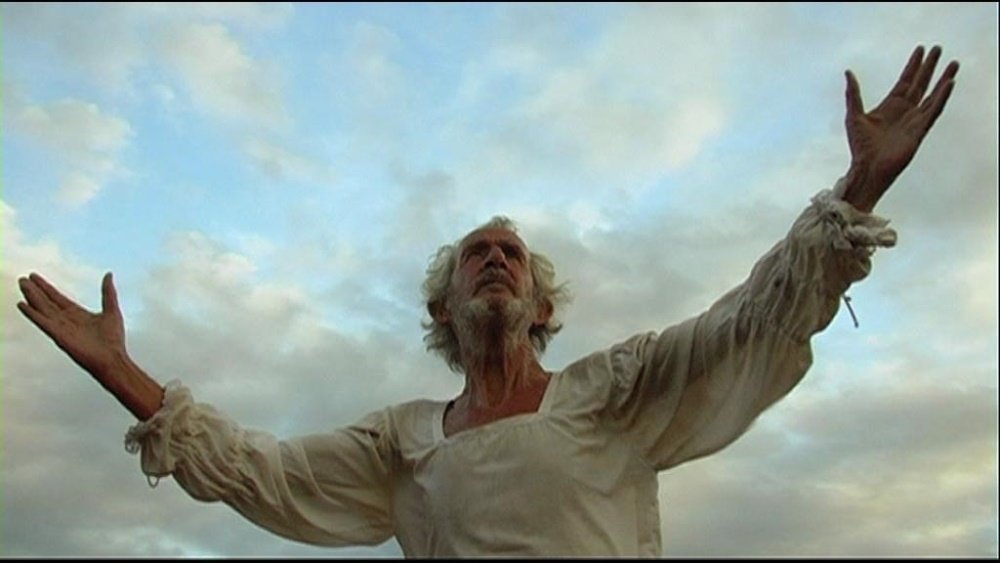 Serra, on the other hand, has ushered in a post-Nietzschean era in filmmaking, an era oblivious of God's death. The abundant comparisons between Quixotic and Beckett's Waiting for Godot are thus symptomatic, except that Serra's odd couple, as much as they resemble Vladimir and Estragon stranded out of time and space in their futile anticipation of God(ot), do not have to anticipate at all. God is always here and now because He comprises the here and the now. “Sancho, look skyward!” exclaims Quixote at a certain point; this very same imperative will be, incidentally, repeated in Birdsong. At a loss, however, Sancho will only take a bewildered scan around himself: his world is replete with signs he either overlooks or is incapable of interpreting. Therefore, contrary to Camus's dictum, the absurdity of it all must lie within us rather than without; it must feed on our idiocy and callousness. This simple thought is further expounded on in Quixote's reprimand flung at his lazy slacker of a servant: “Sancho, you told me it hadn't rained but you merely slept through it! Both the horse and the donkey are wet. I told you there were snails here; you know why? Because it did rain. There was a storm you didn't notice. Sancho, you're always asleep. Look at these wet horses! You're such an ass, Sancho.”

We are the problem. The world impenetrable in its absurdity is nothing but a dogma bequeathed to us by existentialists. So what does it take to awaken us? How can we stop being lazy asses like Sancho? Apparently, the problem can be solved with our optics tuned finely and the right way: no religious experience, enclosed in subjectivity, can be passed on from one person to another (nor can any other unique experience, for that matter). What we can do, however, is hope to craft a situation conducive to someone's experiencing something similar. This is precisely the reason why Serra favors the form over content in the conventional sense (plot, motives, psychology etc.). His form, for all intents and purposes, is converted into content. The religious ineptitude of such films as Trier's Dancer in the Dark or Malick's Tree of Life, as a matter of fact, lies in their postulating God's existence, i.e., portending to diffuse the divine through the prism of the author's individuality, instead of making it manifest, which would require them to take a step back and keep working from behind the curtain. As opposed to Trier or Malick, Serra is a truly religious artist by virtue of lacking style—and adopting, paradoxically, this lack as a style of his own. Operating from this “anonymity,” a religious artist in the strictest of senses cannot be an auteur at all: politique des auteurs would not find a foothold in his constitution.

Paul Schrader, author of the seminal Transcendental Style in Film: Ozu, Bresson, Dreyer (1972), was cognizant of this requirement. “The proper function of transcendental art,” Schrader argues, “is to express the Holy itself rather than express or illustrate holy feelings.” Referring to Mircea Eliade and Heinrich Woelfflin, Schrader develops in his book the idea of transcendental style, which is a feature all the directors engrossed in the ineffable share regardless of their religious or cultural denomination. Schrader's theoretical provisions still stand up when applied to Serra, who, incidentally, admitted his Quixotic had been profoundly influenced by Ozu, the most fully realized embodiment of the transcendental style as defined by Schrader. 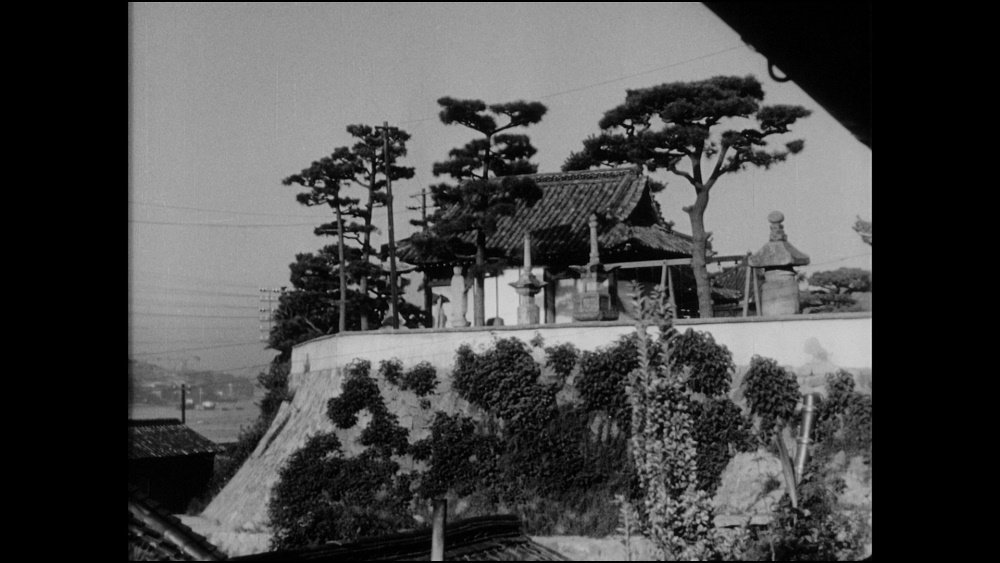 Above: Tokyo Story. The opening and the closing shot: Mountains became mountains again.﻿

So how does Schrader define it? In order to describe its three-step structure, he recounts a Zen parable: “When I began to study Zen, mountains were mountains; when I thought I understood Zen, mountains were not mountains; but when I come to full knowledge of Zen, mountains were again mountains.” Thus the first stage represents a life that is banal, monotonous, and quotidian. The next step is establishing disparity, nurturing the chasm between man and his element, which at a fateful moment (un moment décisif) is bound to incite action. In Ozu's films, disparity usually stems from minor upsets in the family: in Late Spring, e.g., the daughter has to get married but cannot abandon her father; the father, conversely, cannot stand to see his daughter go. Bresson's lonely hero oftentimes faces a hostile environment (see, for example, Diary of a Country Priest). At the pivotal moment, Ozu's father sits alone at home in the wake of his daughter's wedding; Bresson's priest dies an agonizing death. If the first stage rids the audience of emotion as they contemplate the ingenuous surface (see Ozu's iconic “pillow shots”), the second one bares the emotions banality conceals, brings them to a boil, and induces in the audience a schizophrenic delusion: “the mountains are no longer mountains.” The most emblematic of this feeling would be the actual miracle in Dreyer's Ordet—the resurrection at the end. However, for a style to become transcendental in full, according to Schrader, there has to be a third stage: stasis, a still image that not only resolves the dissonance of disparity but transcendentalizes it. Stasis is the final shot of Diary of a Country Priest, where a shadow of a cross is cast on the wall and the voiceover repeats the priest's last words, “All is grace.” Ozu's stasis is more prominent still, as most of his films are bookended with the same landscape: “the mountain” literally “becomes a mountain again.” The third stage is a synthesis of sorts, an act of communion not called upon to deliver us from suffering but to reconcile us to the outside world. 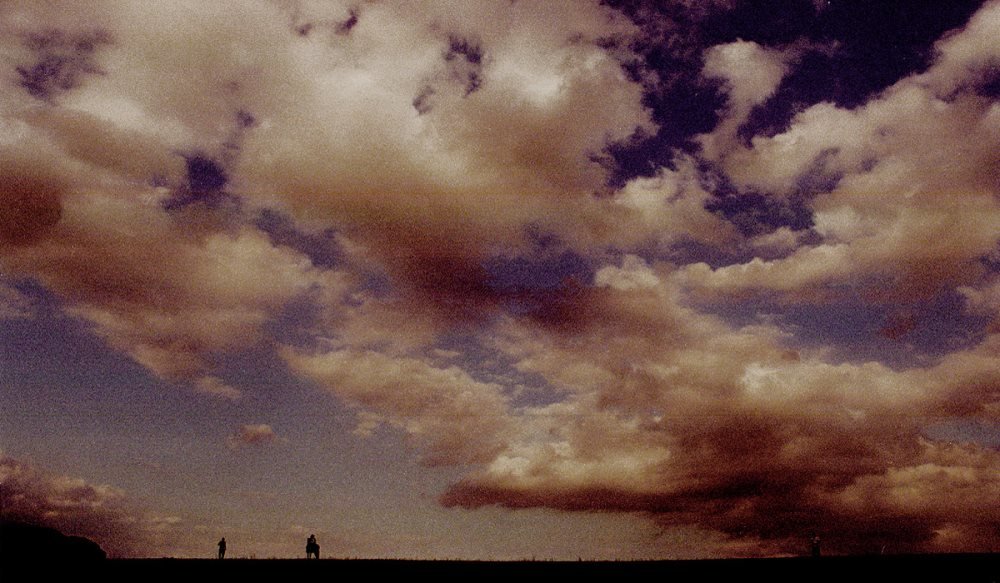 Above: Quixotic. "The divine languor."

Serra’s films reveal similar mechanics. His Don Quixote and Three Wise Men are, first and foremost, ordinary people engaging in ordinary activities: they walk around, talk, swim, sleep as the camera de-valorizes and de-mythologizes them. The disparity originates in irony, a tried and true technique utilized by the classics of the transcendental style. In Quixotic, the irony is uncovered through a series of Quixote’s verbal jabs at Sancho, while Birdsong is chock-full of physical comedy that dials down the pathos as the Magi aimlessly drift across the desert like a bunch of sleepwalkers; at one point, they try to have some shuteye side by side in the desert’s thickets but one of them has too ample a belly that keeps getting in the others’ way. The moments of stasis, in effect, come forth in the moments of “divine languor”: the viewer, sooner rather than later, grows so tired of the characters that his focus inevitably shifts to the background, the landscape, “the world as it is.” Caught up in “human, all too human,” we are liable to ignore it; our only gaze directed at nature is invariably equipped with “the spectacles” of science and technology. “Sancho, look skyward!” Quixote pleads in an ironic frame filled to the brim with his own body. “Look at this,” one of the Magi suggests holding out a stone, so plain yet so beautiful. But irony creeps up on us again because the scene, set in a dark cave, is shrouded in umbrage. In striving to free his stasis, Serra breaks many a frame to communicate the beauty of the sky from beyond the film.

The theology Albert Serra advocates for evades definition. It is safe to say we are dealing with phenomenology rather than divine metaphysics: for the first time since Descartes with his Cogito placed us at the center of the universe, the man is relegated to the background, overshadowed by the Holy. In his Les mots et les choses, Michel Foucault came up with a comforting contention: “Man is a recent invention less than two centuries old; it is a puny hill in the field of our knowledge. Man will disappear as soon as our knowledge assumes a different shape.” Ostensibly blasphemous from the humanist perspective, the idea of impending extinction of humans seems to nevertheless have molded, to an extent, contemporary film. Far be it from Serra, however, to consider it a tragedy. Avoiding close-ups in his Birdsong to discover “the magic of images filmed from afar,” he recognizes a brave new world indeed—a world in which the question of divinity can be posed anew.